“We made the decision early. If we scored, we were going for two — going for the win.” - Coach Leipold 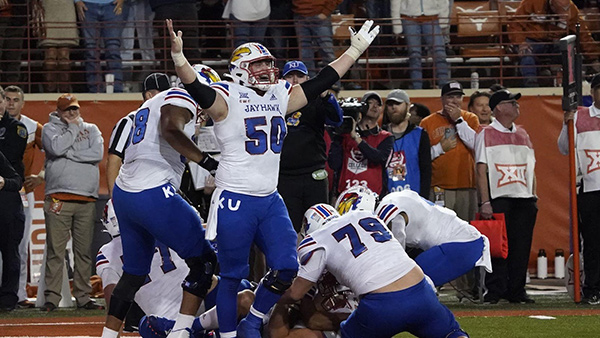 Going into the game, KU hadn’t won a Big 12 road game since 2008. In 2008 George Bush was President, iPads didn’t exist, and Mark Mangino was coaching the Jayhawks. Going into Saturday night’s game KU held the record, a dubious honor, for the most consecutive road losses – 56. YIKES!

So, what does all this football talk this have to do with sales? No, I’m not advocating for reps who have missed quota for 56 straight months to stick it out or not be fired. I want to talk about what happened in OT and how the 1st year coach at KU bet the cattle farm (pun intended) during OT in a game he let get away from him in the final minutes of regulation.

Texas won the overtime coin toss and elected to take the first drive. They scored on their first possession and then decided to kick for the extra point, which was good, and they went up by 7. Next up – KU. The Jayhawks, and their third-string quarterback, also scored on their first possession. But instead of taking the safe bet and going for 1, they elected to go for a 2-point conversion, a HUGE risk for the coach and the team with so much on the line. As QB Jalon Daniels was being pressured by the Longhorn defense he magically managed to find open a walk-on Freshman, Jared Casey, who normally plays defensive, in the endzone for 2 points and the WIN.

For those of you who spend your Saturdays watching college football, I hear you. That’s the percentage play on the road. But consider the 13-years of road losses. That alone would cause any coach to choose safe over sorry.

So, I want you to channel your inner Coach Lance Leipold and start to embrace risk in exchange for reward. Here are some ideas to get you started:

As you begin to go through strategic planning for 2022 push yourself to get out of your comfort zone and think about ways you can disrupt the status quo and when you have to make the decision to go for the tie or go for the win….. GO FOR 2!