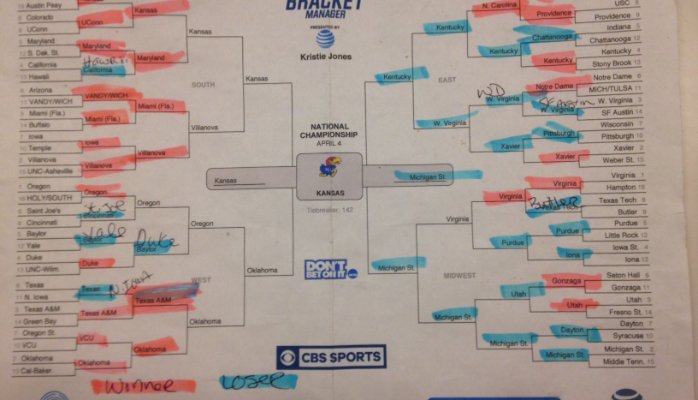 I'm not your regular March Madness fan. If you follow me on LinkedIn then you know I went to the University of Kansas and I'm a huge Jawhawk Men's basketball fan. If you don't follow me, then hopefully my "March Madness" profile picture was a tip off (basketball pun intended). I calculated that by the time March Madness starts I've watched no fewer than 200 hours of NCAA basketball. I never miss the Jayhawks play. Then there are the games I watch for scouting purposes. I estimate I see 70% of all Big 12 games. This year I was keeping a close eye on UNC, Duke, Iowa, Kentucky, Louisville, etc- you get the point. I watch a lot of NCAA basketball. So imagine my disappointment to be tied for 16th in my March Madness pool!

If you had the pleasure of watching the last 4 days of basketball with me, you probably heard the following from me at some point: "Is this happening?", "Yep- this is happening!", "Did that really just happen?", "Did Michigan State really lose to Middle Tennessee?", "What conf. is Middle Tennessee in?", "A&M is in overtime? I switched that game off with a minute left- it was over!" Ahhhhh, I love March Madness.

Not only was the basketball incredible, there are plenty of business lessons to be learned.

1. Practice like it's game time. I can't begin to tell you how many games were won or lost at the free-throw line. The last 60 secs. can last 10 mins. thanks to all the fouls committed. Time and again we saw the importance of the shot those players have been practicing in their driveway since they were 6. But, they never practiced in front of an audience of 30,000.

So, how many hours do you spend practicing your craft? How many books have you read, webinars attended, blogs read, time spent working your mind's muscle memory? The fact is practice doesn't make perfect, but it's the difference between A players and the rest. Set aside time each week to stay on top of industry trends, the competition, and what's trending in your area of specialty.

If you have a big presentation with a prospect or client coming up, in front of five people, don't just go into the conference room by yourself to practice your slide deck and talk track. Ask 10 of your co-workers to listen in. It will add pressure, so when you get in front of your audience of five, it won't seem like so many.

2. Don't underestimate your competition. Every industry has a 12 seed. Yale over Baylor? Little Rock over Purdue? Yep- that happened. Even after all the hours of tape the coaches and players watched before each game, the underdog found a way to win.

Make sure you are aware of the strengths and weaknesses of the competitors you come up against most often. Follow them on LI and twitter. Sign up for their newsletters; attend their webinars and public demos. Stay on top of what the competition is doing.

It's also fair to point out that sometimes your competitors are within your prospect's company. Just as important as knowing who your sponsors and influencers are is knowing who your detractors are within the company you're trying to sell to. Most times you aren't actually there when the internal selling occurs. Have you properly prepared your sponsor for the objections they might get when they go to sell your solution to the committee? Have you personally spoken with the detractors to make sure you understand why you don't have their vote?

3. You have to want it more. So, Texas A&M is down double digits with 45 seconds left. I've already switched to the Wisconsin game, when my phone alerts me that A&M v. UNI is going to OT. What??? How did that happen? Ok, to be fair, UNI allowed 3 turnovers. That didn't help. But, A&M wanted it so badly that they added pressure and forced some of those turnovers.

Sometimes the difference between winning and losing is not giving up. As a runner and tennis player, I'm very aware that most of the outcomes of races I run and matches I win are mind-over-matter at some point.

Wanting it also requires you to stay positive. You have to have positive self-talk. You need to keep the negative thoughts out of your head. Everyone has a bad day, that doesn't make you a bad person or a bad sales rep. In sales confidence is a huge difference maker. During a tennis match I repeat to myself over and over, "You're the winner." I do this to keep the "mind monsters" out. What you tell yourself affects your performance. Fill your head and heart with nothing but positive thoughts!